Bow Cuman
View cart “Bow Varang” has been added to your cart.

Сuman – a short wooden bamboo-laminated bow. It is a stylization of composite bows which were used in the Middle Ages by Central Asian and Eastern European nomads: Kipchaks, Cumans, Torks, Pechenegs and others.

These medium-length bows (120-150 cm) have long stiff siyahs without string bridges, horn layer on the belly and sinews on the back.

Cuman – the bow is named after Cumans – one of the nomadic Turkic tribes Kipchaks, who originated near the Chinese borders, and later occupied the entire Great Steppe – Desht-i-Kipchak. The name Cumans are known in historical documents in the second half of the 11th century when they were involved in the migration to Eastern Europe. There they inhabited the volatile territory known as Cumania and raided the Byzantine Empire, the Hungarian Kingdom, and Kievan Rus. After the Mongol invasion (1237), many sought refuge in the Kingdom of Hungary, after which many Cumans settled in Hungary. 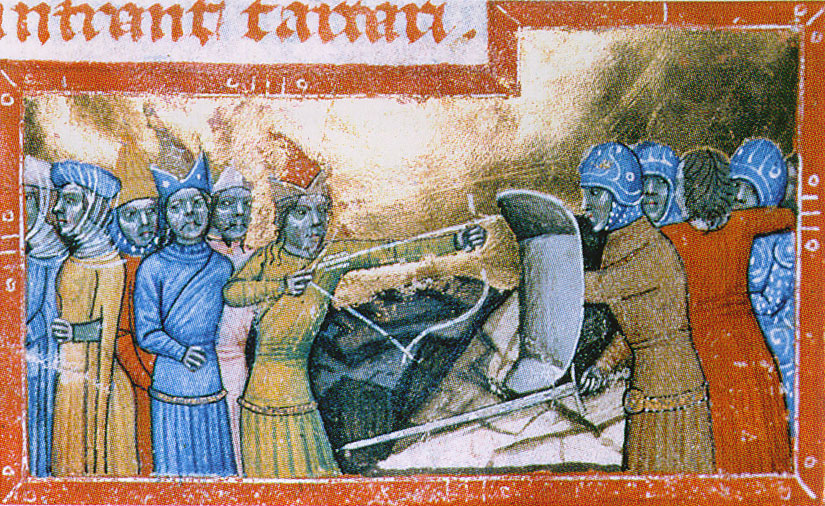 The Mongols in Hungary. 1285 Hungary, Ink and paint on parchment. The artist depicted in the painting the Сumans – a tribe of nomads who were well known at that time in Hungary.

As nomadic people, the Cumans were excellent horse archers. They used recurve composite bows that were perfect for their light cavalry tactics. They were good at surprise attacks, false retreats and ambushes. Also, their trick was to suddenly turn around on horseback and continue shooting. In such attacks, it was difficult for the enemy to hide from sudden attacks which were repeated again and again.

Сuman is rather short than long bow, it has a full envelope length  53″ (135 cm). The length of the string at the same time is 47 inches. Its max draw length 27-29” depending on the draw weight and draw weight up to 39 pounds. Please note that this may not be enough for tall and strong men. For everyone else, it is good: for men and women of different ages and also for children.

Based on its history, this compact bow is perfect for horse archery, where the big draw weight is not needed. It will be comfortable for shooting with light arrows, as will give them a good speed. Not big draw weight will help you to concentrate on improving your shooting technique if you start to master Horse Archery or the technique of thumb ring.

Our Сuman bow has stiff siyahs reinforced with horn plates. The bow has a leather grip, upon request a horn pad at the arrow place can be done, there will be a surcharge of 5$ for one side and 10$ for both. The bowstring from Fastflight (or analog) material and fabric case is complete with the bow.

Video Review made by Armin Hirmer from Malta

Video Tutorial: how to care for the bamboo laminated bows. This video contains English subtitles, do not forget turn them on.

I ordered a 43# bow. It's strong, snappy and a beautifully made bow. The craftsmanship is flawless as...

The Bow is gorgeous. The quality is flawless and even after a year of use, it shows no signs of wear...

Nath
by Nath on Sarmat Archery

I pray for Sarmat's safety in the coming days. I have ordered multiple items from their store and have...